Who would of thought it, me showing Trash in Belgravia… but it’s true. Just to prove it frequent collaborator Joe Giacomet and I made the flyer as well as some bloody nice Swag for the show. In true Sw1 fashion there are beautiful girls serving Champagne cocktails, some entertainment and a whole load of art from an extinguished list of artists… Show opens on the 17th of October, more info to follow.

So, now thats all over its time to do some painting myself. I got invited by the legend Loomit who i got to meet a couple of years ago painting in Munich to paint a monastery in the wilds of Bavaria the project is called heaven meets earth and is a curated series of works around the Ottilien Monastery. i know it sounds a crazy idea by Loomit is probably the only writer that could pull it off.

So fly into London to pick up my stuff and off to Oktoberfest….well munich area anyhow. Luckily i am painting at the same time as M-city a long time friend from Nuart so i know Octoberfest won’t be the only ones getting trashed in Bavaria this week.

A last final dash to a super nice gallery to paint on their walls before i left Tokyo and popped some eyes up for Filthy Luker.

New bags for Japan show, cutting of the Chanel bag from the show and the test sprays of 3 more up market trash bags. Show opens on the 2nd of August at :

Last minute dash for the plane

So been beavering away, making stuff for Fuji Rock festival and getting the show together for Tokyo on the 2nd of August. The shippers have just taken the canvases, the spray paints ordered and last minute prizes for the high strikers are being made. I wouldn’t of guessed that i would have traveled to japan for the first time with a fire bell and a large rubber mallet in my bags but that’s the life of a traveling showman for you. The above shot is the last frame in of a time lapse that Calum and Saft films helped make to promote the Show, should be posted online soon (hi res version here). Well thats almost it, got the last mad run around picking up the odds and sods for both the High Strikers and the show and then its on the plane, the next post will be from Japan, but here’s a sneak peek at some of the new work for the show in japan.

Tools of the trade with the carrier of choice….lol 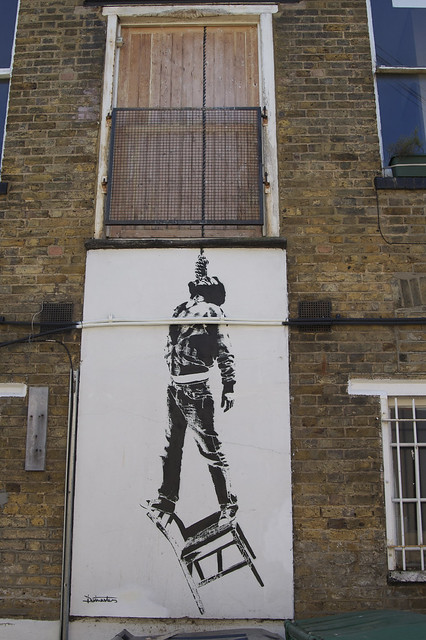 Stokes Croft is a weird part of Bristol, run down and forgotten by town planners it has a strong community and vibrant feel. There are numerous agenda driven stories circulating around the events of the night. The locals painted by police and the authorities as yobs and vice versa. All i know is this is probably the best shot video of public unrest i have ever seen! What i know of the local people is that they are passionate about their forgotten corner of town, their  comunity and the unity they have found from direct action wether that is the graffiti or their humorous but effective self organization (see http://www.prsc.org.uk/). Having exhibited, worked and painted in the street shown i can vouch for them being a self helping community of non aggressive, thoughtful people. Free Stokes Croft!

Trailer park asked a group of us to paint out the white walls at cordy house for a party this weekend 17th and 18th of December. The team was Myself, Zadok, Nelly from Best Ever, Wreckage, and Matty webb.  The theme was containers, so we faked the look of a container yard. 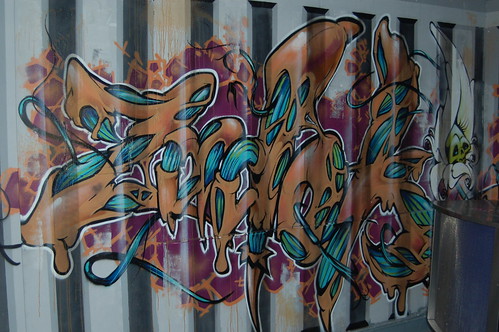 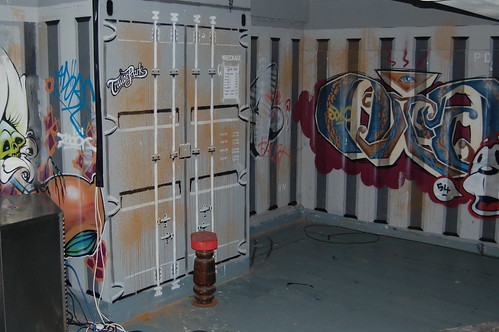