Been waiting for this to come out since last summer’s Nuart. One of my favourite pieces from last year’s festival. What didn’t make the cut was the frantic 2 hours were Hera was caught at the top of a very broken down cherry picker,  while an international crew (an Irish man, a English man, a Canadian and an East German….i know it sounds like the start of a playground joke)  tried to follow the Norweigian instructions to rescue her. Of course filmed by the amazing Saft films.

So the dust has settled and aches have been soothed and some distance has been put between myself and the city of Stavanger.  It was my 6th Nuart,  I have exhibited, curated and produced and sometimes all 3 at the same time. This year saw me in purely a production role, helping artists to navigate the beer halls of Tou Scene, Stavanger. We were blessed with unseasonably balmy weather, with a mid twenties 1st of October and weeks of little rainfall. For a year where we did a gallery show there was a hell of a lot of street work done. The sun came out and the lid came off the box of frogs.

The beer halls at the old Brewery consist of a large for hall with 6 17m by 5m chambers running off a large corridor. most people took a whole chamber for them selves. Each one becoming an environment for their characters, themes or installations.  The rooms are large and its a daunting task putting a mark on them. This years artists really took to the task and created some stunning spaces and moods making the space a stage for their art. 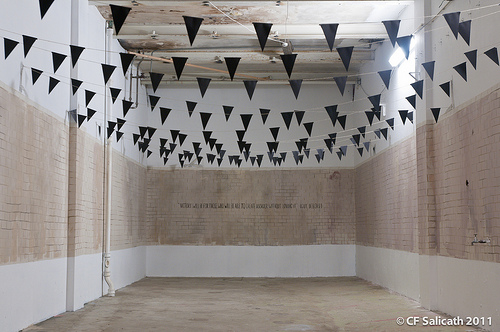 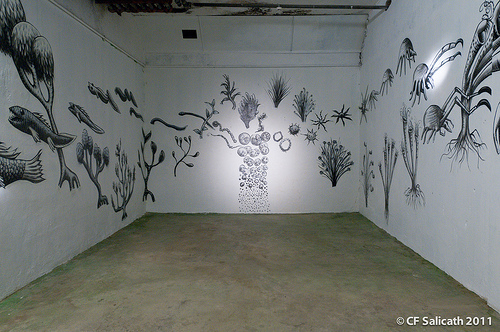 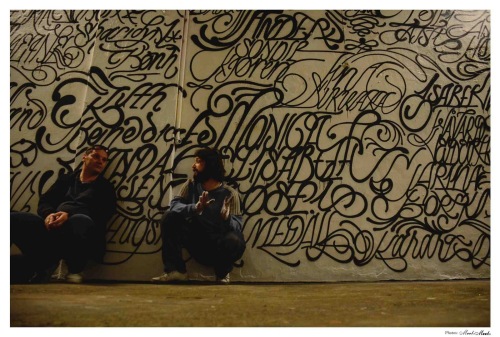 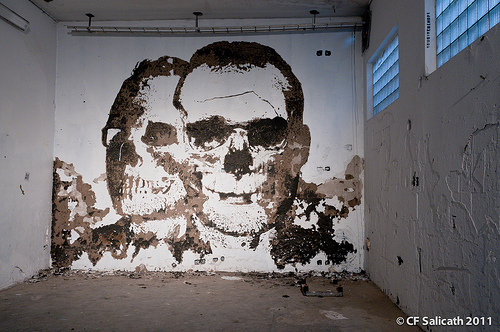 To top it all Nuart had Lucy McLaughlin over to paint a lighthouse just outside town. This two eek project coincided with Nuart and after finishing up early Lucy, Kate and Matt hit town, joining the artists on the streets. 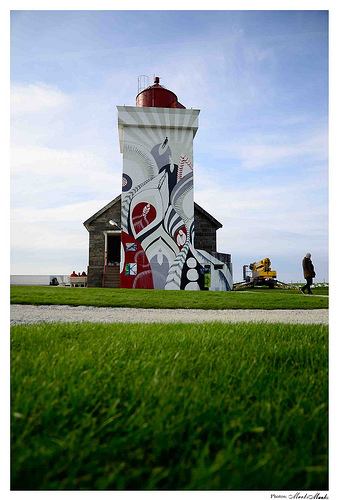 This year Matt and Evan from Juxtapoz made the trip from the states to witness the fun and create a stream of posts live during the week. Couple of great guys and their posts can be found here. 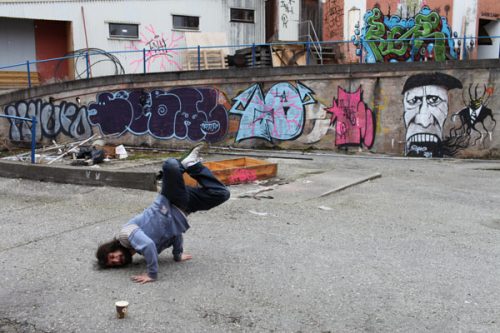 We were lucky we had such good media support, things happen so quick during production that without people like Henrik  who shot stuff for Arrested Motion we would miss a lot of what goes on ourselves. Henriks photos and posts can be found here .

We had a few screw ups, some crossed wires but all in all the production team pulled of one of the smoothest years i’ve ever had at Nuart. There are too many names to mention, some i hardly met, but each one helped achieve off a city wide invasion of art that leaves a lasting legacy on the streets of Stavanger. The show is open from friday to saturday at Tou Scene, but you only have to walk around the town to see what fun we had this year. See you in 2012.

Well we are up and running, Phlegm at it in the beer halls, Herakut’s room painted and ready. The next few weeks will be a mix of paint, drink, film and mayhem…. probably. Saft.no are back at it with the dynamic perspective rig and a big pimp RED camera and hand built pimped out steady cam rig. 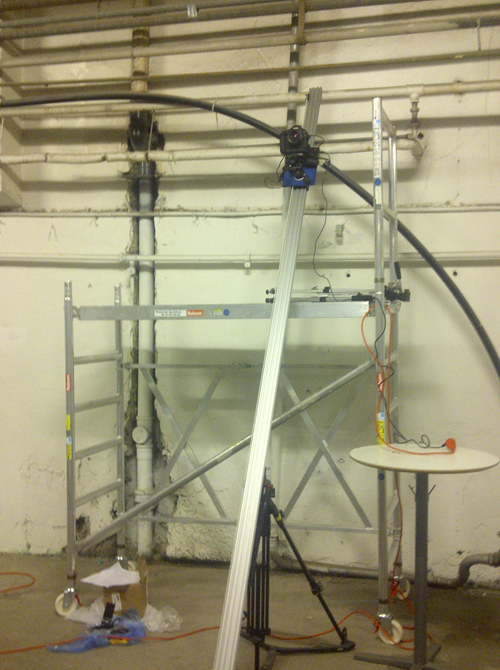 So you can be sure of some beautifully crafted video documentation coming soon. Well, its friday, the calm before the storm. 5 more artists hit the walls tomorrow, Escif, Huyro, Herbert Baglione and Tellas.  With new artists arriving everyday the numbers grow steadily, with the beat of the drum on this slave ship beating out rhythm “planning speed”

So, it’s that time of year again! I’m off for the 6th time to  Nuart 2011, this year sees a great line up of friends old and NU. The location is the beer halls at Tou Scene. An old and favorite location in Stavanger. The show opens on the 1st of October, with a wild night of dubstep from Hyperdub in the machine room next door it promises to be an outstanding opening night party. Details of who’s playing at numusic.no
My show production starts from the 18th, although there has been folk who have been hard at it for a long time already! I will of course update here, my take on the proceedings.
This year we release a book Eloquent Vandals with the history of the festival in glorious print, put together by back bone of the festival Victoria & marte (sounds like a song by the fall). Anyhow it will be released at the launch party in the gallery on the last weekend of the show (end of October). Although i am not on the official line up i am sure there will be some Dotmasters stuff up on the streets of Stavanger this year.

On the hop or “Look Ma no Stencils” 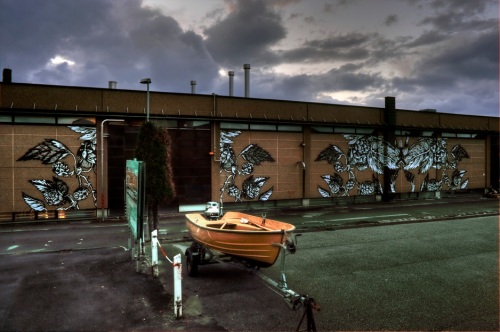 It’s been a hard week, 16 hour days in the wind and the rain, and all too seldom the sun. After 3 days helping Ben Eine in Bergen (traditionally the wettest city on the west coast) in the blazing sunshine, i was hopeful that Stavanger would deliver the same. WRONG! The building above is the Lervig brewery, yes i got given the keys of a brewery and painted a bloody wall. Talk about couldn’t organise a piss up in a… Mike, the master brewer even offered me use of the company fridge! Hard to get enthusiastic for getting drunk in the rain 8m in the air in a cherry picker…..DAM.  Dodging raindrops the size of 50mm shells meant working through the night, in the vain hope that the forecasts were right. WRONG! But its nearly there and i”ve only a day more tweaking and introducing some stencil elements. The still above is from Martin Hawks, (Saft films) during the week he road tested some new camera equipment out and produced some stunning time lapse (with a difference!!) . He must of shot 1000’s of frames and each nights brought its own weather logistics, cameras don’t seem to like the rain much either. But wait till you see it…..beautifully filmed. Thanks to Carl for the shots below…again stunning, and of course the Nuart crew, and Reed productions for setting the whole thing up.

So…Here’s your first chance to watch “Eloquent Vandals” the film about the  Nuart’s festival 2008. Half an hour long and made with a hell of allot of good will. Its not a bad snapshot of what happens at Nuart (if you ignore the horrid lies that i break our artists noses). Any how you can watch it Monday January 31st at 10.00 GMT at the brooklynite gallery site. The film was directed and shot and lit by Martin Hawkes with myself conducting all the interviews and doing the sound . There is a fantastic soundtrack by Nick smith and the whole thing was put together at Saft films under the watchful eye of Mr Nuart himself Martyn Reed. Its worth a look and features footage of Nuart 2007 plus in depth interviews and a general look and feel at what we do at Nuart. There are lots of free give aways  available on the day so turn on, tune in, and Get up!

Its been the first week in Stavanger for the Nuart Festival this years festivities sees the launch of Nuarts ‘Landmark Series’, a series of huge walls around the Storhaug area in Stavanger. This week has seen Blu and Ericailcane and myself visit town and paint, the other artists on the program will come in September. The weathers been patchy with 4 seasons in one day, most days. After a ladder, scaffold and in the end a cherry picker its at last finished, Now all i have to do is run the production for everyone else…Special thanks to Bardia who helped with logistics and of course the Nuart Crew. 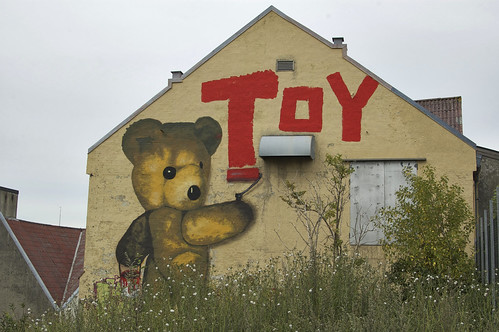 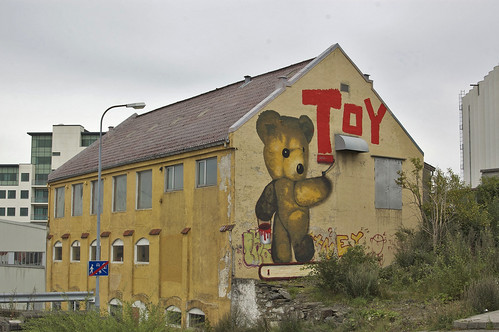 For those that don’t know a Toy is a derogatory graffiti name for someone who’s work sucks!

Below stunning work from Blu and eric ail cane

Some Toy in Town

First up in Stavanger,’ Toy up’ series, Dotmasters,

So if you haven’t guessed i am in Stavanger at the moment, a weeks painting as an artist then back to london for a week for Boy soldier and Portobello film festival then back two Stavanger as head of production for the rest of Nuart.

If your wondering what the place is like check below

view from the smokers fire escape 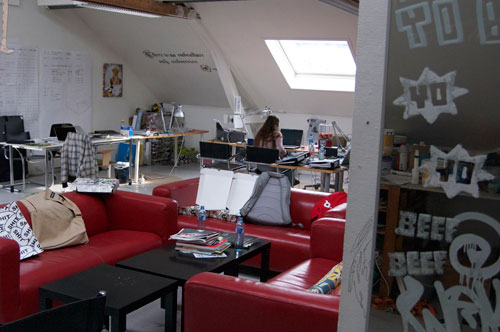